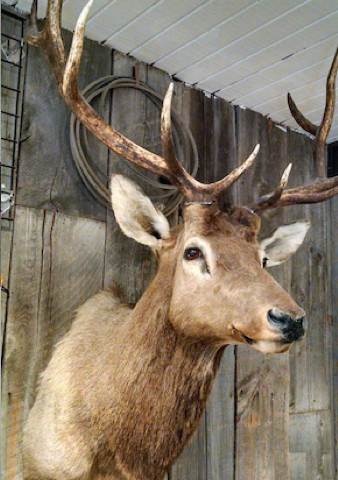 The Story of Elk Ivory

Elk, cervus canadensis, are the only native north american land barren animal with ivory tusks. So in the mastadonian period Elk large as their cousin the bison roamed our western plains. Elk, massive and strong had bodies built to survive intense climates. Thick, muscular necks because they had to supportthe weight of large antlers, and two awesome ivory tusks looming from their top lip like deadly spears. So the ice age melted and north american mammals genetically mellowed, and the large ivory tusks receded in front of their eye teeth.

To Native Americans, wapiti means stamina, and ivory adorned their every occasion, especially so for women. Crow suitors supplied 300 or so ivories for a bride’s wedding dress. Bridesmaids beaded ivories into concentric rows on the gown. Because ivory trading by trappers and Indians was so hot, ivory became as important as horses and guns.

Settlers in the high country in the late 1800s shifted the history of Elk and ivory trade forever. Migration routes were obstacle courses of fences, buildings and plowed fields.

Tusks were popular for making rings and watch fobs and settlers made extra money selling legally harvested ones and tusks of winter kill. So supply increased as Elk, disrupted from migratory routes, starved because of poor winter range.

So outlaws appeared and began poaching Elk for ivories only. Known as “Tuskers” they built hideouts, a famous cabin was northwest of Jackson Lake. Because Tuskers were such a problem in 1905 the Wyoming legislature set aside a portion of Jackson Hole as the Teton Game Preserve and banned hunting there, but Elk still ruthlessly died at the hands of poachers and tuskers.

Because president Roosevelt put Elk ivory on prohibition in 1912 busting the tusk boom, killing Elk just for ivory became a felony. Jackson Hole was a last stronghold for Tuskers. Congress eventually passed legislation creating the National Elk Refuge. The Jackson Hole herd is the largest in North America, Elk continue to roam ancestral territory. So thanks to strict regulations, licenses and citizens dedicated to wildlife and preservation, elk ivory is again so politically correct to wear.